Hello, dear friends. This is just a quick note to ask you all to continue to remember my mother. Her surgery last Friday went well and she seemed to be recovering well initially. However, she had a setback on Tuesday and then yesterday there seems to be a lot of concern for her heart. So rather than being sent home as we had hoped, she is being moved to the Cardiac Care Unit. My sister is still with her and is giving us daily updates. We are thankful for a competent medical team who are monitoring the situation constantly and providing excellent care for Mom. My mother is in good spirits and simply entrusting herself to the Lord, knowing that ultimately, He is the one who is caring for her. Thank you for keeping Helen in your prayers.
Posted by Barb at 8:53 p.m. No comments: 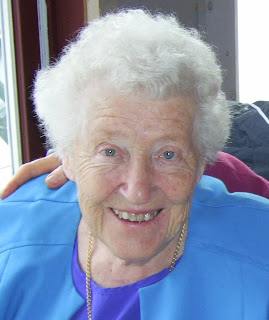 I just want to thank all the people who have been praying for my mother. She had cancer surgery today and came through it well, although the doctors are keeping a close eye on her, especially her heartrate. I'm so thankful for my wonderful sister Beverly who is there with Mom during this time. It eases the concern, and the regret that I am not able to be with Mom through this situation. I know that many, many people have been praying and please continue to pray, as she isn't out of the woods yet. But coming through surgery so well at age 89 is no small feat! Praise God for His grace!
Posted by Barb at 12:31 a.m. 2 comments:

When you look at the life of Jesus you see that above all, His heart was moved by the things that moved the heart of the Father. In fact, His life's purpose was motivated by the love of God for his lost children. He showed His love for God the Father by pouring out His life and His love for those whom God loved. 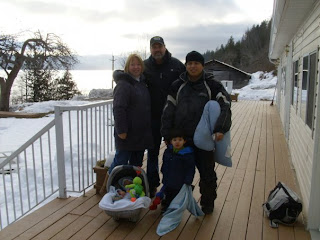 In my life, I have felt most loved and cared for when someone has shared in caring for those who are most precious to me. When my children were small, I had friends whose greatest act of love towards me was that of caring for my children. I still have friends who care for my children and grandchildren in very tangible ways, when I am too far away to do much that is tangible for them. For these friends I am most grateful. (You know who you are.)

And this week, a friend has also shown her love for me by caring for those who are special to me here in Moldova. I received a package in the mail that contained a gift for me. But it also contained similar gifts - lovingly and creatively and beautifully made by hand - for two of my co-workers, individualized for each of them. My dear sister in Christ, you have touched my heart by your thoughtfulness and care. Thank you so much. (You know who you are.)
I have felt this kind of love from others, also, who have embraced the work in which I am involved by praying for me and for my team and for our ministries here in Moldova, and by supporting our work financially and by participating in some way. But I know that their care is motivated by more than just their love for me. They are motivated by their love for the Father and their desire to share His love with others.
In the same way as my friend showed me her love by caring for my friends, 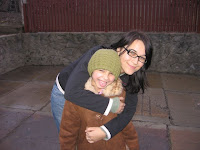 we show our love for God by caring for those who are precious to Him. Whether it is children in Moldova or street kids in Toronto, or AIDS orphans in Zimbabwe or seniors in retirement homes or homeless people in shelters or single mothers in housing projects or people nearby or in faraway lands who have never heard about God's love or the name of Jesus; by caring for these ones who are so precious to the Father, we show our love for Him in a way that I am sure causes Him to smile. 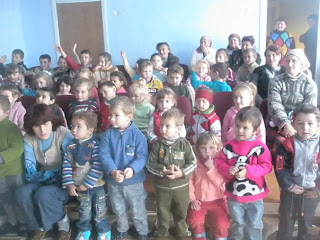 Today I was reading some reports on some of our projects here in Moldova - stories that illustrated the difference we are making in the lives of children through the day centres we help to facilitate. Some of the situations in which these children live are heartbreaking. God sees and cares. I am just so thankful that - because someone gave 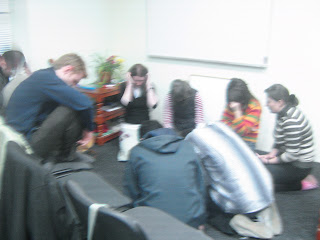 and someone left home to live and work in Moldova 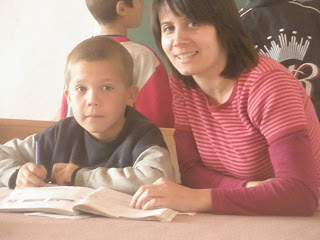 and someone trained national workers how to work with children


and someone made sure that health and safety standards were met 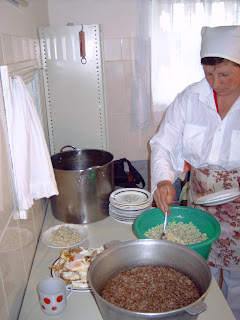 and someone is preparing healthy meals each day, 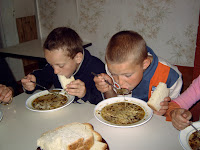 and someone takes care of the finances

and someone writes reports to donors -
that children in 10 different day centers around Moldova have had a hot meal today and help with their homework and have been shown and told about the love of God for them.
How about you? Have you done something today that caused our heavenly Father to smile? How have you cared for those who are precious to Him?
Posted by Barb at 10:11 p.m. 1 comment:

A Year for the Lord 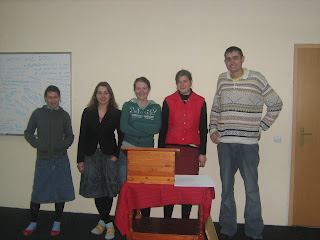 We have a new program that has just begun in January. It is a response to the huge problem of emigration in Moldova - so many people leave the country to find work elsewhere. Many young people feel that if they go to another country, they can get lots of money and have a better life. Often parents leave their children at home or young people leave illegally and end up getting into all kinds of problems and trouble. So our new program is a challenge to young people to give a year for the Lord instead of leaving the country. Moldovans are required to commit a year to mandatory service of some kind and so this is a similar idea, except the service is for the Lord. It is called the D.E.L.T.A. program and the initials are for giving a year to the Lord (in Romanian).Here is a photo of the first team participating in this program - the 4 girls on the left are the team and the tall guy is Spiridon, the program coordinator. Three of the girls are Moldovan and the one in the green is from England, Kate. They will spend about 3 months in each of the girls' home village, serving in partnership with the local church. They will return regularly to Chisinau for training and debriefing and hopefully by the end of the year they will be ready to consider more long-term involvement in missions or just a more committed involvement in their local church. Meanwhile they are serving their communities by working with children and young people, feeding and visiting elderly people, doing service projects of various kinds and generally just making themselves available for however the Lord wants to use them. On this team, two of the girls are native Russian speakers, one is English and one is Moldovan. They are having a challenging time communicating among themselves.