The last few weeks have been quite a ride for my mother. As I shared previously, she had surgery to remove her cancerous uterus. Then she had a lot of complications and the following Friday the doctors performed another surgery, this time with a general anesthetic and an incision, to correct a bowel obstruction that had occurred as the result of the first surgery. Then just as things seemed to be getting back on track, Mom's heart stopped one night and so the doctors decided to insert a pacemaker. So yesterday, Mother was back in the operating room again for the 'simple' procedure - 20 minutes, local anesthetic, incision - of inserting a pacemaker. Mom is now back in the cardiac care unit with the concerns about her heart rate now addressed and hoping to soon be able to go home. My sister soldiers on at Mom's side and we hope that next Friday Mom will be playing bridge, not visiting the surgeon again! Then on March 22 she'll be celebrating her 90th birthday. We trust it will not be in the hospital, even if the medical team is a wonderful group of people!

Thank you all so much for your prayers and your expressions of concern. They are greatly appreciated.
Meanwhile, back in Moldova, I have been busy with a variety of things. The last two Sundays I have been visiting our local ministry teams in the villages in the south and then the north. It's always good to get a taste of what's happening on the local scene with people. I also have been spending some time each week with our new recruits, especially the 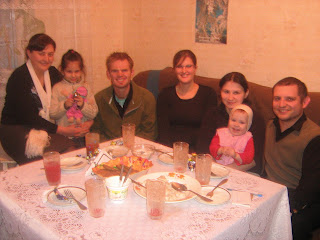 couple from Australia. One day my colleague, Albina, and I took Justin and Jessie out to the village where they are having their 'homestay' - living with a Moldovan family to become familiar with the language and culture. Here is a photo of the couple and their two children, along with Albina (on the left) and Justin and Jessie (in the centre). They have been having an interesting and valuable time with these new friends. Also, they are one step away from receiving their long-prayed-for residency permit. We'll know next Thursday...

In other news, Moldova is in the midst of a political campaign in the face of upcoming elections at the beginning of April. It's really something to see big signs up saying "STOP COMMUNISM", vote for the Green Party. Even the Baptist bishop is running for office! More about this next time.

I'm afraid I don't have many new photos as my camera is not functioning properly. I need to find a place to get it repaired or leave it for dead and buy a new one. Meanwhile I'm begging and borrowing photos from other people. 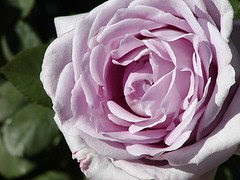 Oh, and one more thing - tomorrow is March 8 - a big day in Moldova as it is Women's Day. It's the equivalent of Mother's Day except that ALL women are honoured. Everyone's giving out flowers to the women in their lives and our team is going to have a special social event on Monday for all the women on our team. So to all my female friends, wherever you are, I want to wish you a happy 'Ziua de femeie' and to let you know that you are special - uniquely created, a blessing to those who know you, and precious in the eyes of the Lord. Felicitari!
Posted by Barb at 7:25 p.m. 1 comment: