Saturday in the Park 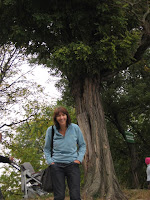 Being a lovely fall day on Saturday, and having one of our new recruits - Denise - as a houseguest, we decided to go for a walk in the nearby park.

It was so lovely and many people had decided to do the same thing, taking advantage of the cooler but still comfortable weather to enjoy the beauties of God's creation. 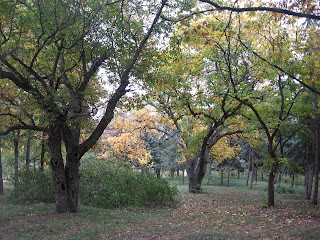 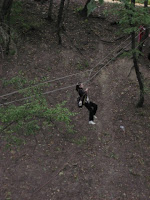 There were families and mothers with babies and young people with various wheeled conveyances but mostly it was just a peaceful stroll. 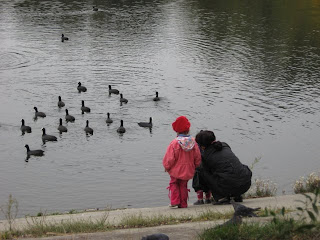 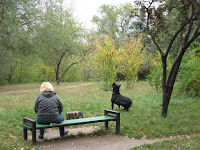 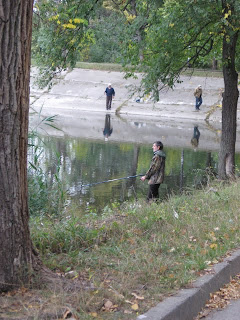 On this Thanksgiving weekend, even though I may be missing the magnificent fall colours we enjoy in Canada and the turkey dinner with all the fixings around the table with family and friends, this was a special time of just appreciating God's creation and all that He has given me. 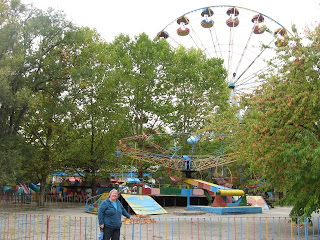 This may be a poor country economically but the wealth of its beauty cannot be calculated. 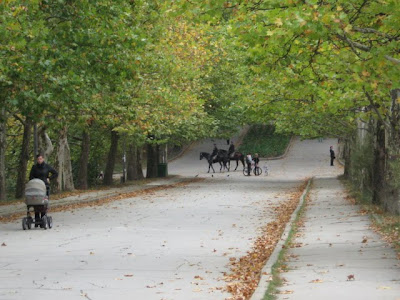 So last week was Eugen and Dana's wedding in Slobozia. It was truly a Moldovan experience! 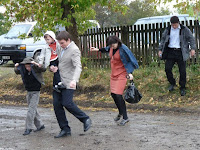 They had hoped to have the wedding outside and so the inside of the church was all set up for the meal and festivities afterward. 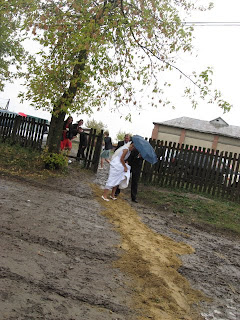 With the rain and all, everything had to move into the church and so we sat there with the food spread before us as the service got underway. There was barely space between the tables for the wedding party to walk down the "aisle" but they were all lovely in any case. Getting from the parking space across the muddy street to the church was the first challenge. 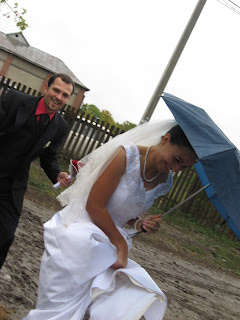 But Dana and Eugen appeared to just be happy that the day had finally arrived and everyone was rejoicing with them in the beginning of their life together. 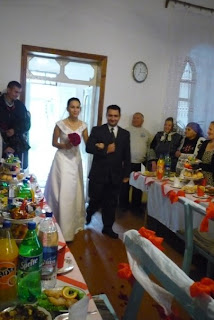 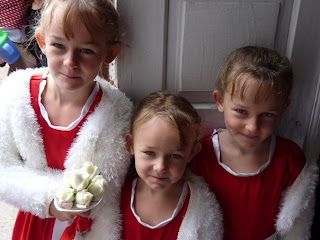 Hannah, Lydia, and Rachel were junior bridesmaids - so lovely in the dresses that Natasha had made for them!

Rafael escorted Dana in, and his son Philip was the ring-bearer.

The day didn't start out too well for me. I was supposed to take a carload of people with me but as you may remember, Rosie doesn't like the rain and last time she was in that part of Moldova she broke down and had to be towed home. So, before we ever left Chisinau (thankfully!) Rosie just stopped running. I managed to pull off the road before the engine completely died and ended up travelling, along with my passengers, in the team van to the wedding. Cozy but we got there. 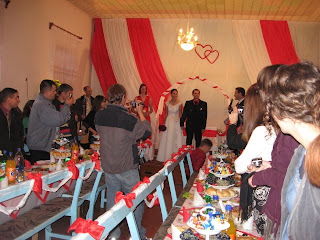 There was lots of food at the wedding. I mean the table were full from the time we first sat down and by the time the ceremony was over and we were able to eat, we were hungry. So people start eating and filling up. Then Corinne leans over to me and warns me - there's more food coming; this is just the appetizers. Sure enough before too long there are plates of hot meats and stuffed green peppers and sarmale and clatite - all the best of Moldovan fare. 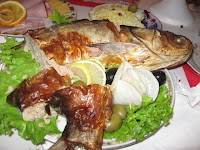 Delicious but by the end of the time, I was certainly stuffed! It was amazing how the girls who were serving were able to squeeze between the benches and tables to bring all these platters of food to set before us.

A Moldovan wedding is a fairly spontaneous affair with lots of opportunity for anyone who wants to contribute something to the program. Some recite poetry, some sing , in this case some of our guys even did a little drama about Dana and Eugen. People are invited to make remarks or bring greetings and they had a great MC who even had games in which the guests participated. The bridal party were asked to come up with ideas of what makes a man a man and a woman a woman. There were some very interesting answers such as, "a woman knows how to iron", and "men like football"... you get the drift. One lovely moment in the celebration was when the pastor invited a couple from the church who had been married for 50 years to come to the front and share their secret and give some advice to the newlyweds. 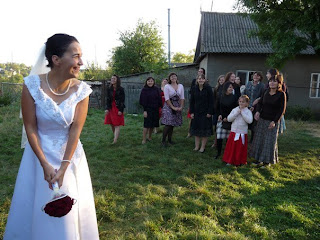 That was pretty special and then Dana decided to honour the woman by giving her the bridal bouquet. Later, the dear lady came to Dana and returned the bouquet to her so that she could throw it to all the single ladies who were hoping to catch it!

By the time the eating was all done the sun had come out and so it was possible to continue outside with the cutting of the wedding cake and taking of photos. Everyone wanted to have their picture taken with the couple and so they did. I'm still waiting to get picture that someone took of me with the newlyweds. It really was a lovely and joyful day! 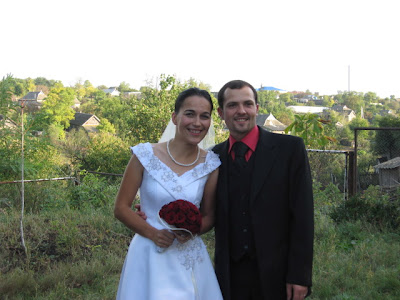 Congratulations, Eugen and Dana!
Posted by Barb at 9:02 p.m. No comments: