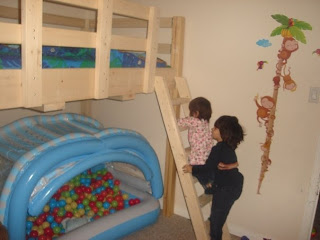 My daughter sent me some pictures that made me very proud. She and her husband, Daniel, had completed a 'little project' for their son (my grandson) Alejandro. They built him a bed!! And it's beautiful! I am really really impressed and I can't help telling everyone how proud I am. I'm sure that Alejandro will enjoy this great bed! 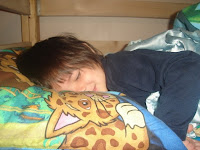 And of course, I also want to take the opportunity to show you how beautiful my grandchildren are - and how much they are growing!! Alejandro is now 3 years old and Eliana is 1 1/2 and looks just like her big brother. Aren't they just the cutest? 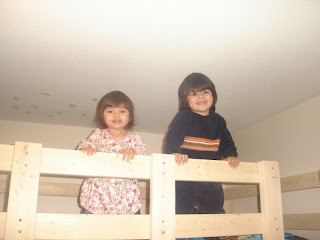 And, that's not all! There's going to be another little one joining their family in May. Grandma gets to keep on bragging! :-)
Posted by Barb at 5:47 p.m. No comments:

This week I have been multiply blessed. An e-mail from a friend reminded me of one of those blessings. My friend had mentioned the Needlework Guild in Toronto who gather homemade articles by the thousands to give to various organizations and helping agencies. It made me think with appreciation of all the work so many women do with their hands to bless others. And it reminded me of a lovely visit I had this week with one such woman in the village of Milestii Noi.
I and my 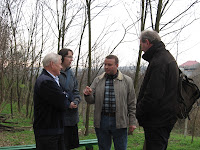 colleagues were hosting some visitors from Holland whose agency provides financial support for many of the projects that we run here in Moldova. We took them with us to see some of the work and projects that they are funding. We went to visit the village of Razeni, where one of our student teams was helping the Baptist church in their new church construction project. The pastor was showing us around and telling us about his vision for this church and for the churches he is seeking to plant in the surrounding villages. The two Dutch brothers who were with us were interested to see some of the projects that their agency was supporting. One of those projects is the regular delivery of food parcels to elderly people who are struggling to get by. The situation of seniors in Moldova is incredibly difficult and those who don't have children or family to care for them are sometimes in the most shocking and horrendous living conditions. 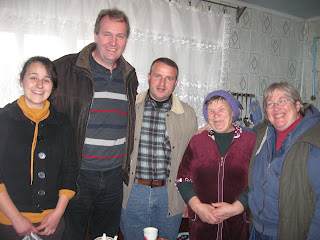 We went together - four of us and the pastor - to visit sister Sophia and to deliver a food parcel to her. This lady is a Christian sister, a widow who lives all alone in a small village where there are only a handful of believers. They meet in various homes and sometimes in her home. She is very lonely as her 4 children all live elsewhere in Europe - places where there are jobs to be had.

In this particular case, her living situation was not all that bad, but that's not to say she was not in need. But she was not a needy person, per se, in the sense that, from the moment we walked in , this delightful faith-filled lady was giving to us who had come to give to her! As soon as we walked in she greeted us with a huge smile, and pulled out the table and chairs and started putting food on the table. We sat down together and had a meal and tea with her while asking about her family and her life in the village. She was delighted to tell us her story and answer our questions and tell us about what she does with her time. The Dutch brother asked if she reads the Bible every day and she answered in the affirmative and that then she spends time making things each day, such as the round chair pads we were sitting on. She jumped up to go to the other room and came back with a whole bag full of little slippers that she had made. Each one of us was given a pair for ourselves and for our family members. Our visiting Dutch friend has 3 children at home and she found slippers for all of them and for his wife. He mentioned that that day was his daughter's birthday and the pastor said that sister Sophia had just celebrated her birthday recently so we should sing happy birthday. I admitted that my birthday was to be in 2 days and so we all stood and sang the Moldovan version of the happy birthday song for Naomi and Sophia and for me. Sophia was still asking people who else they needed slippers for as we went out the door and I was able to restrain myself from mentioning my grandchildren, as she had already been so generous. 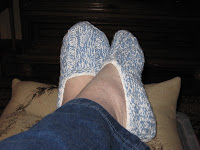 It was a wonderful visit to a dear lonely sister in Christ and we came away feeling very blessed and knowing that she felt blessed to have had us visit her! My feet right now are warm and cozy in the slippers that she gave me - a pair that she chose for me that fit me perfectly!
Posted by Barb at 5:04 p.m. No comments: 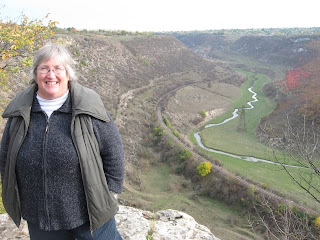 I must apologize. I was kidnapped. Borne away from blogger by the seduction of Facebook. All my facebook friends have seen photos and had updates that many of my faithful blog readers know nothing about! I repent in dust and ashes... or, at least in a flurry of blog updates to get you up to speed.

You heard about the wedding, but you missed Corinne's birthday party. You saw photos of the park but you didn't accompany me on Stefan cel Mare street on the day of the civic holiday. So let me share with you some of the highlights from October: 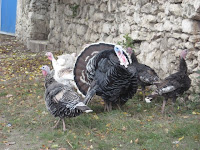 October has been a pretty busy month, with Thanksgiving and all. In Moldova they don't celebrate Thanksgiving 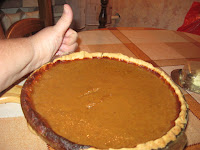 on a certain date as we do in Canada. Rather, each church chooses a Sunday in late September or early October to thank the Lord for the harvest. I didn't want to totally miss my Canadian Thanksgiving so I filled my apartment with the best aroma imaginable by making pumpkin pie. It was so good!

Besides Thanksgiving, October is also a month of birthday celebrations. My sister's birthday is October 16 - Happy Birthday, Beverly!

and my friend Corinne's birthday was on October 17. 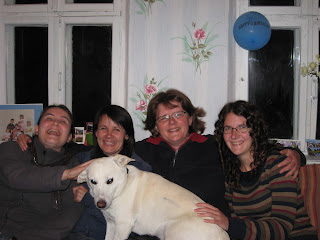 In true Dutch fashion Corinne invited me and some of her friends and neighbours to her home for her birthday party. We had a great time. Corinne had made a delicious Dutch soup - kippa suppe - and we all enjoyed that and birthday cake and a true Moldovan celebration. Moldovans are very earnest in their offering of birthday greetings and very devout even in their celebrating. Several of the women came with poetry to recite or read and flowers to present, along with a blessing 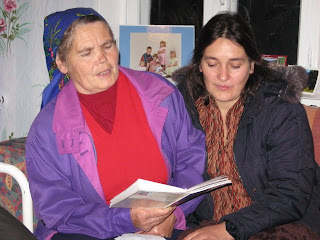 . At one point in the evening 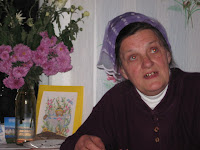 we sort of played a game - 'Name the Psalm' - as one of the sisters recited entire psalms and then asked us to say which one it was! I knew a couple of them, where they were from - but I certainly couldn't have recited them like she did. 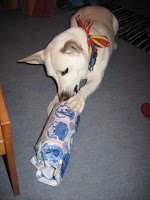 Corinne's birthday is also the same day she celebrates the birthday of her closest friend and canine companion, Silas. So even he had a gift or two to open.

During my visit to Corinne we went one day for a walk in the woods. It was a lovely fall day and the path was covered with newly fallen leaves. Silas had a great time exploring in the forest as well. 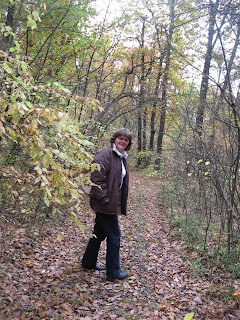 In October there is also a municipal holiday celebrating the anniversary of the city. There were all kinds of festivities in downtown Chisinau and I went down there with Natasha and Viorica and a visiting Brit and a visiting American! It was all about dancing in the streets! 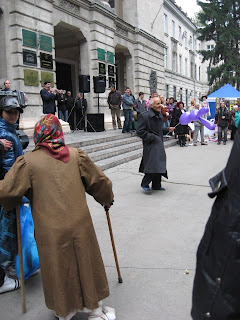 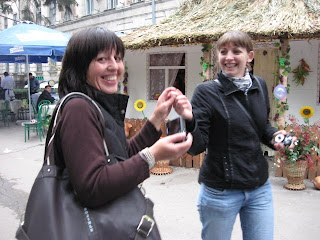 Last Sunday I travelled with a couple of people to the village of Anenii Noi. Natasha was making her presentation in the church there, seeking to raise financial and prayer support for her upcoming journey to central Asia. She is shown in the picture below with another girl, 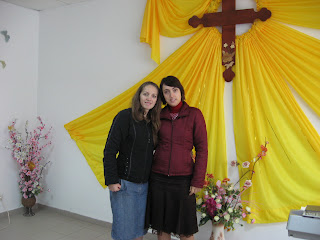 another Natasha, who used to work with our team as well. That young woman is working with the church there, reaching out to young women and to the elderly. Another young woman who went through our training program is now working with her church and reaching out to street people. Such a blessing to see good fruit from the work we are doing....
Posted by Barb at 11:47 p.m. No comments:

So last week I was having some friends over for dinner. One of them, Ana* (*names have been changed to protect the innocent) asked if she could bring anything. I assured her that I thought I had everything I needed. She really wanted to know if there was something she could bring so finally I said, 'Well, you can bring flowers if you want.' Later that evening my guests arrived. Ana had with her a grocery bag with a big bottle of pop and some other things. She handed it to me and I took out the pop thinking the rest were her own groceries that she was going to take home. But she said, 'No, this is for you.' She lifted a 2kg bag of flour out of the bag. 'You said you needed flour.' For a brief moment I was uncomprehending, until suddenly I realized that I had told her to bring flowers! I burst into laughter and we spent the rest of the evening teasing Ana and laughing over yet one more cross-cultural blunder. But I did promise to make something for Ana with the flour the next time she comes over!
Posted by Barb at 10:12 p.m. No comments: